Until today, WooCommerce Bulk Variations was a front end plugin for adding variations to the cart in bulk. It was great at saving your customers time, but it was still a pain for you - the store owner - to edit variations in bulk in the back end.

We've just released version 2.0 of WooCommerce Bulk Variations. This is a major update with lots of new features and behind-the-scenes improvements. Now you can bulk edit variations, list variations of products with 3 or more attributes, and more.

Keep reading for a summary of all the new features. 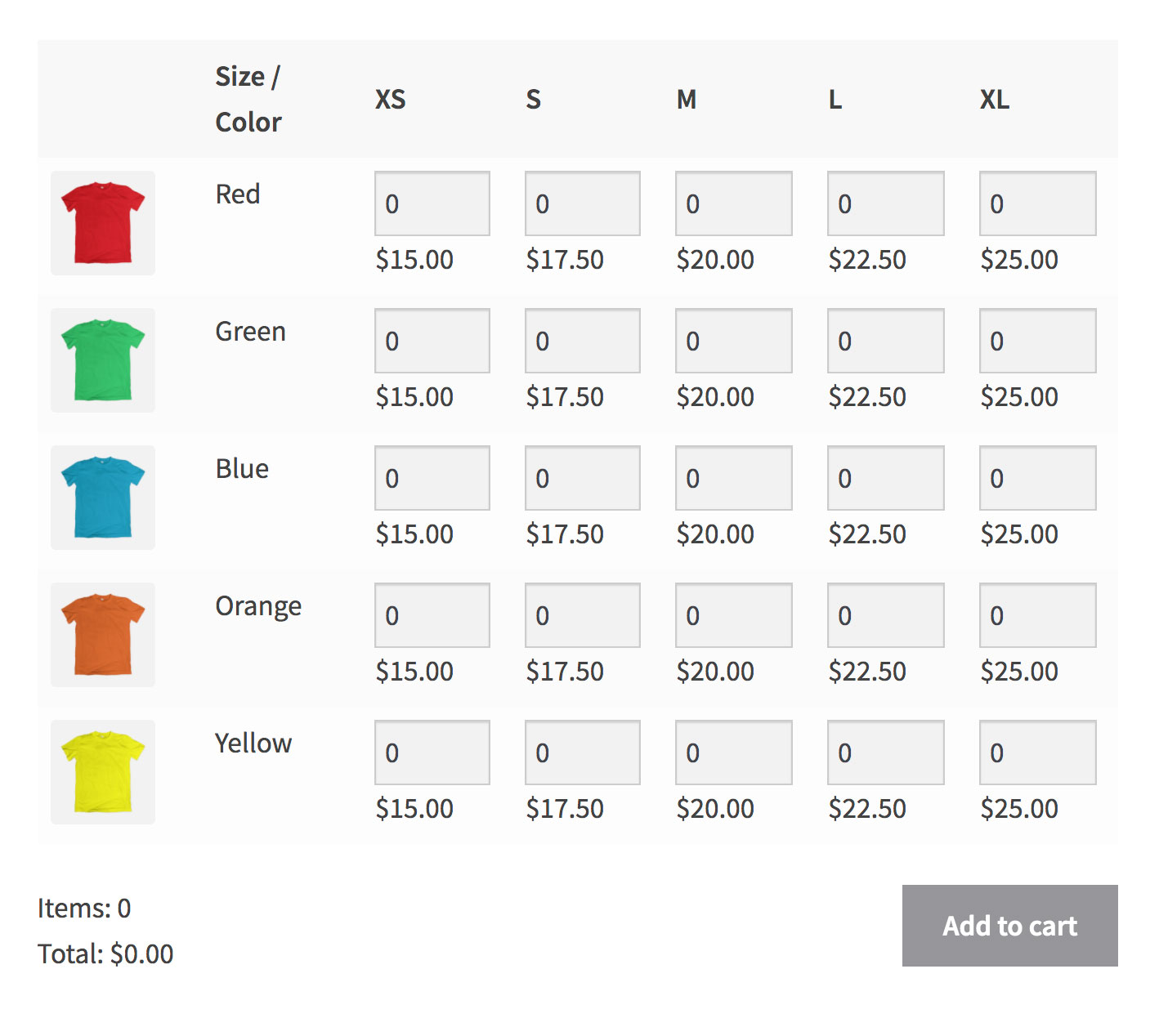 New support for products with 3 or more variation attributes

Previous versions of WooCommerce Bulk Variations could only display products that had 1 or 2 attributes which were used for variations. For example, a t-shirt shop could display 'Size' along the horizontal axis of the grid, and 'Color' along the vertical axis.

Customers had been asking to display products with 3 or more variation attributes for a long time. At first, we were stumped. How can you display 3+ attributes in a 2-dimensional grid? Fortunately, our new developer Luigi had an excellent solution: 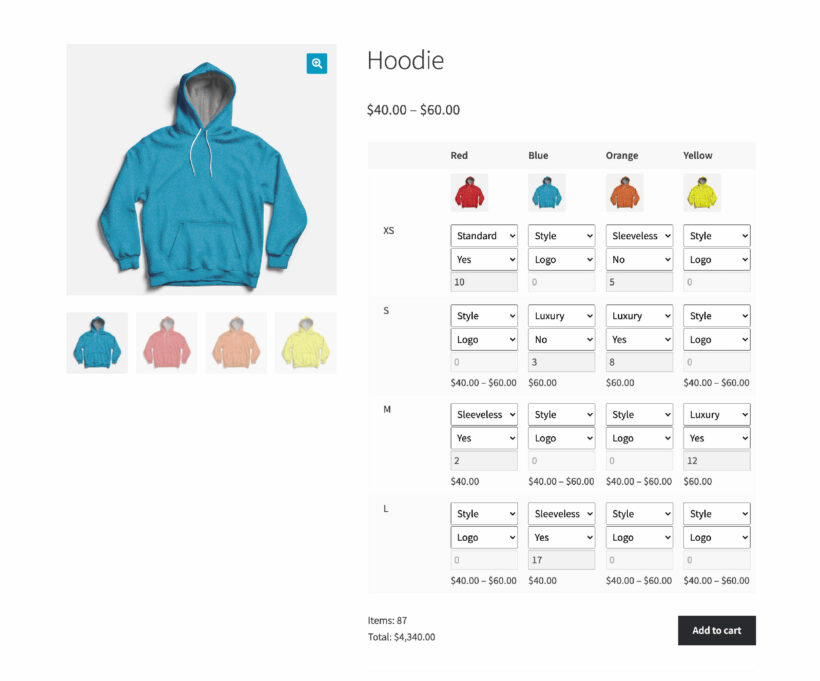 Now there is no limit to the number of variations that you can display in the grid. If there are more than two then you can choose which attributes are used for the rows and columns. The remaining attributes will appear as dropdowns within each cell. Perfect!

Most store owners don't realize that WooCommerce itself has a bulk actions dropdown for variable products. Don't worry if you're one of them, as you're not missing much!

As it comes, the bulk actions dropdown isn't very useful. The problem is that it only lets you edit ALL the variations for a particular product at once. There's no fine-grained control to edit specific groups of variations only. For example, what happens if you want to bulk edit all variations with a 'Large' attribute which cost more than $50? At the moment, you would have to do this by editing each variation individually - nightmare! 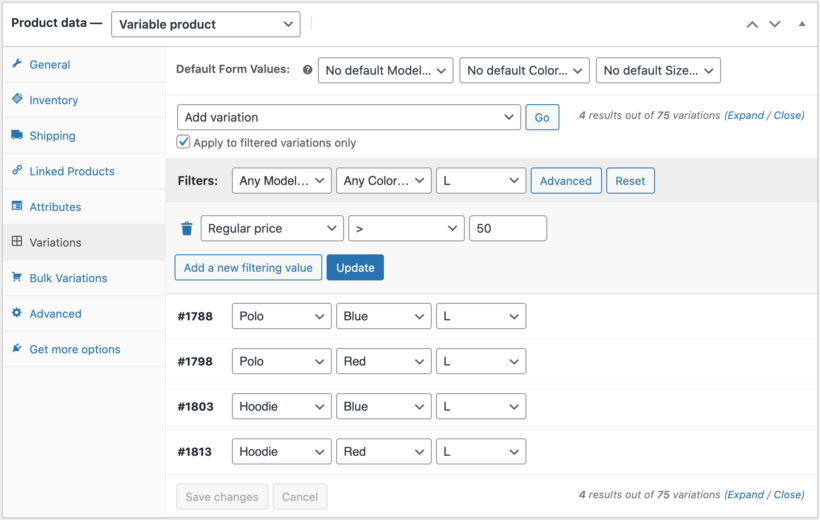 The new version of WooCommerce Bulk Variations lets you filter the variations before using the bulk edit dropdown. That way, you can edit certain groups of variations without affecting the rest. It's a huge time-saver. 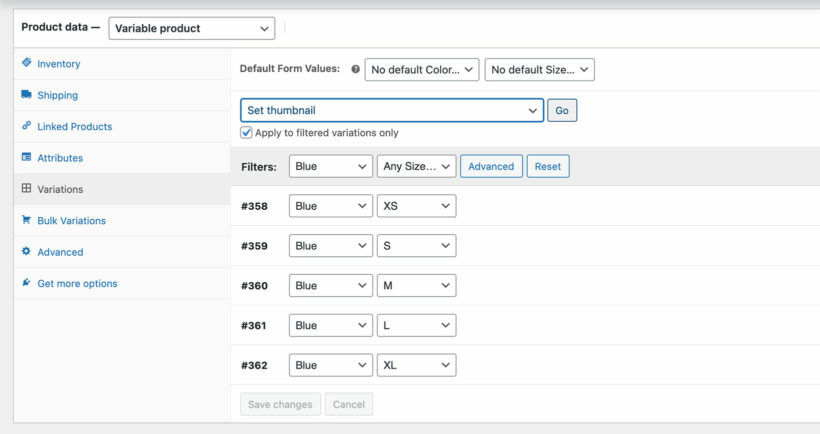 This is fine if you just have a few variations. However, it quickly becomes a nightmare for products with large numbers of variations.

Let's say that you sell a t-shirt in 5 sizes and 7 colors. That's 35 variations. You need to add a separate image for each color - so that's 7 images in total. Naturally, you want to add the red image to all the red variations at once, and then repeat the process for each color. But unfortunately this isn't an option in WooCommerce. Instead, you have to edit each of the 35 variations and add an images to each one. Nightmare!

In the new version of WooCommerce Bulk Variations, you can use the filters to select all the variations with the 'red' attribute. We've added a 'Set image' option to the 'Bulk actions' dropdown. Use this to quickly add the same variation image to all the red t-shirts. Easy!

Previous versions of WooCommerce Bulk Variations would always display the price of each variation in the grid. That is normally appropriate, but becomes pointless if every variation has the same price.

There is now a 'Hide prices if all variations have the same price' option on the settings page. Use this to hide the prices from the grid. The overall price for the variable product will still appear at the top of the product page, as usual.

Until now, the bulk variations grid could display images as a left hand column. Customers had asked for an option to display the images along the top row of the grid instead. Your wish is our command!

Behind the scenes, we have significantly improved and modernized the plugin's code. It now uses the latest technologies and works better responsively and in different WordPress themes. Boring but important!

Where to get the new features

Existing WooCommerce Bulk Variations customers can update from the WordPress Dashboard as usual. Since it's a major update, we recommend testing on a staging site first, and taking a backup. Make sure everything is working the way you expect before applying the update to your live site.

If you're not using the plugin yet, install it today:

Co-Founder of Barn2, Katie loves helping people to use WordPress and WooCommerce in new and exciting ways. 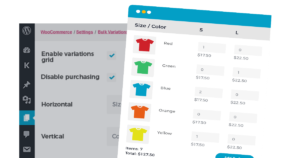 Helpful articles and tutorials. No spam, unsubscribe any time.